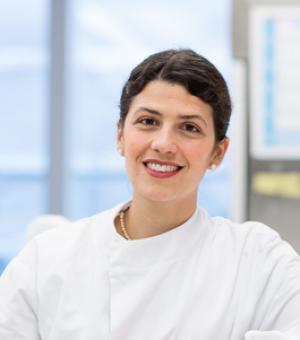 Elena joined the Oxford University Biochemistry Department in 2014 as an independent group leader to study the structure and function of cell surface receptors in neural and vascular development. A major breakthrough in her laboratory revealed that the adhesion GPCR ‘Latrophilin’ forms large structured assemblies in the presence of two other cell surface receptors ‘FLRT’ and ‘Unc5’. Depending on the cellular context, distinct super-complexes with unique functional properties are formed. Elena’s long-term aim is to understand the functions of distinct receptor-ligand complexes through a detailed knowledge of their structures and signalling properties during neural and vascular development of the brain. Before joining the Department of Biochemistry, Elena worked as a PhD student in the group of Stephen Cusack at the European Molecular Biology Laboratory in Grenoble (2003-2007), and as postdoc in the group of Yvonne Jones at Oxford (2008-2014). Elena is a Fellow and Tutor in Biochemistry at Somerville College.