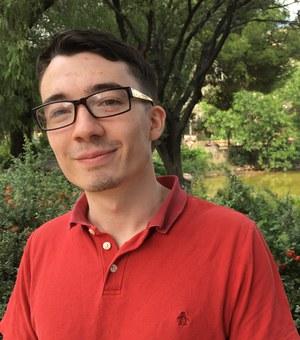 Liam joined the Oxford OXION D.Phil. programme in 2014. Before moving to Oxford, he completed a B.Sc. in Biochemistry at the University of Bristol (2010-2014), having also spent a year working for GlaxoSmithKline in their Pre-clinical Safety and Bioelectronics departments. In Oxford, he studied molecular mechanisms underlying neurodevelopment and disease in the cerebellum in the lab of Prof. Esther Becker, his main supervisor and one of our collaborators. In particular, he focused on the structural and functional roles of adhesion proteins in circuit formation. In our lab, Liam successfully purified large amounts of his target proteins, which he required for specific biological assays. Liam also investigated ion channel mechanosensation whilst completing a secondment in the Tucker group (Department of Physics).

In the future, Liam plans to expand the scope of his research and gain a broader understanding of how mechanical processes underpin the functional dynamism of the nervous system. He has submitted his thesis in September 2018 and accepted a postdoc position at the University of Auckland.